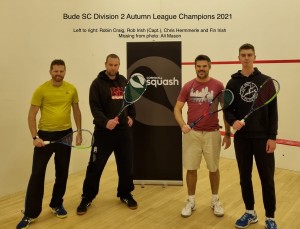 Rob Irish’s Bude SC take the Autumn League crown again with star player and #1 Fin (son of) claiming a perfect first half record of wins. The only blemish following the team’s run of 9 straight wins came at the Mennaye in the final week with a 3-1 defeat at the swashbuckling hands of the Pirates. The long journey down the Atlantic Highway was not a worry for Rob’s charges as the ‘Budists’ were already untouchable and therefore winners of the league.  Unfortunately, the Div2 Champions are unable to accept promotion due to losing a key player to voyages afar – good news for Dave Priem’s NQY2 who occupy the relegation spot in Div1!