Another  superb weekend of racketball at the ‘Home of Cornish Racketball’! Plenty of thrills and spills with lots of matches taking place and a stunning climax to the weekend when local champ Jonny Newton took on Truro’s Pete Ellicock in the main event final. This final ended 3-0 to Jonny but Pete certainly ground out the points to have a solid lead in two of the three games. It was fast and furious with copious long rallies – we couldn’t remember any rally with less than ten shots – that had the crowd gasping in astonishment at the quality of the play. Amazing racketball – don’t let anyone try to tell you it’s anything but exciting played at this high octane, high skill level. In the end it was Jonny’s fitness and persistence that won the day but as a spectacle it will live long in the memory! The over fifties was won by Nigel Bell who dropped only one game in the four matches he played – all in one day, a testament to his outstanding fitness level. RU was Bude’s Tony Saxton who had to battle hard to overcome locals Richie and Shuv in very entertaining matches. Nigel will wear the crown for a year and it was very well deserved. Falmouth’s Jerry Thomas who recently turned 60 took on reigning champ Tony Bowyer from Truro in the 60’s final. Both had won their groups convincingly but it was the steadier play that again gave the title to Tony who made it three in a row. Jerry certainly had the subtlety and court craft to topple the Truronian but made errors at crucial times. In the O70s it was a rerun of last year with Falmouth pair Terry Beckett and Mike Fernihough contesting the final. Both players put on a fine show of racketball with Mike doing much of the retrieving and Terry waiting patiently for opportunities to lob or drop. In the end it was Terry who had the better killer shots to claim his second title in a row. A great final.
Thank you to all those who played or supported the event. With gratitude of course to The Falmouth Club for hosting the event and to Mark for organising it so well again. Next year we hope more players will enter…… 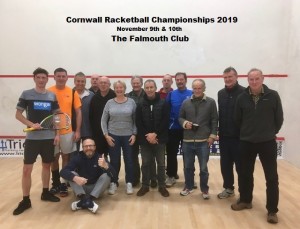 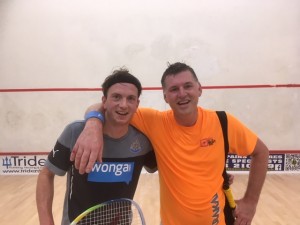 A great weekend of RB at the FAlmouth HQ has just concluded with four new county crowns being awarded. In the O70s it was an all-Falmouth affair with ‘youngster’ and county president Terry Beckett taking the title against defending champion Mike Fernilough. Both players showed great agility and skill in front of an appreciative audience to showcase why RB has a lot to offer after the squash rackets have been hung up. In the 60s, favourite and reigning champ Tony Bowyer really had his work cut out against a determined and extremely mobile Nick Banfield. In the end the 3-1 scoreline reflected more the merits of steadier play and fewer unforced errors. In the 50s it was an all-Pirate affair with Chris Davel taking on Ian ‘The Dive’ Hatch. The rallies were long and hard and most in the gallery felt for Hatchy who only and hour or so before played out a grueling 3-2 in the semi against Dave Smith from Truro SRC (Match of the Tournament). Chris put Hatchy to the cutlass in a ruthless display of errorless RB. The 40s final was fast and furious with Truronians Pete Ellicock and James Green taking centre stage. James did extremely well and probably won the more exciting rallies but Pete, as a hardened RB practitioner, showed his true class at the age group – quite an exhibition!

Thanks are extended to The Falmouth Club for generously hosting the event. The famous club is in good health at present with an active and forward thinking committee which is a delight to see again. By far the biggest thanks go to Mark ‘Sir’ Newton whose return to these shores and The Falmouth Club is surely great news for everyone in the squash and RB community in Cornwall. A great event! 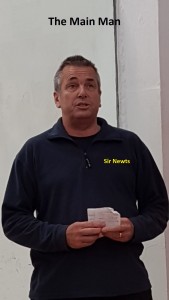 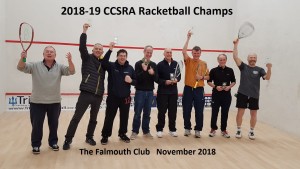 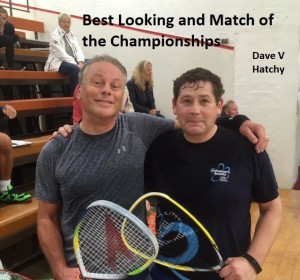 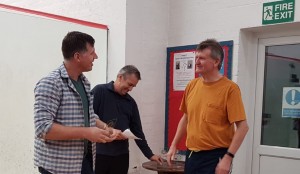 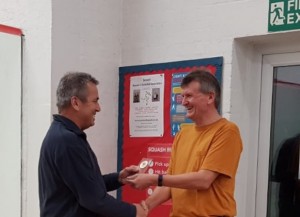 Tony B and Mark N presenting…..

Truro HQ was rocking with Racketballers of all abilities and ages on Saturday 21st April . Truro Club members Peter Ellicock and Nigel Bell, enthusiastic players and very special double act, organised a uniquely RB County Championships with the generous aid of sponsors HUS Estate Agents, Cornish Concrete Products and GreenSparks Electrics – thanks to them for making it all possible. There were six categories altogether, Seniors, Ladies, Men’s O40s, O50s, O60s and O70s. Four Truro Club members won their age group categories: Rory Brickell(Senior), Peter Ellicock (O40), Nigel Bell (O50) and Tony Bowyer (O60). The two remaining categories went to Falmouth Club stalwarts Shuv Garlend (Ladies) and Mike Fernilough (MO70). Run as a festival the day started at 9:30am with continuous matches throughout until 8:00pm with huge thanks as usual to David Smith and his Committee for granting the pleasure of the Club as the venue for this inaugural event. A considerable about of money was also raised for the Bristol Heart Foundation so thanks to the 32 players who entered. A hugely successful event which many hope will become a permanent date on the calendar in future. Many thanks to Peter and Nigel…… 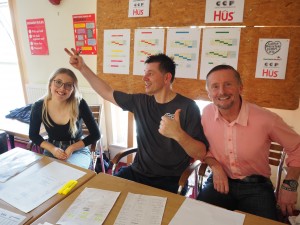 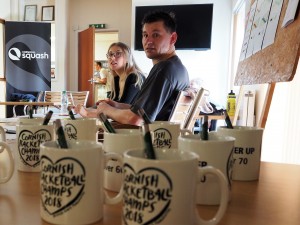 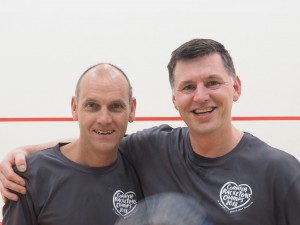 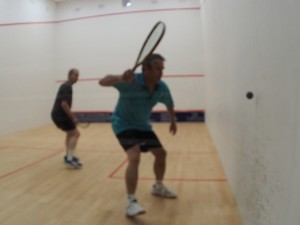 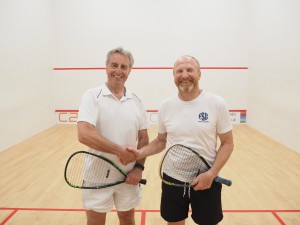 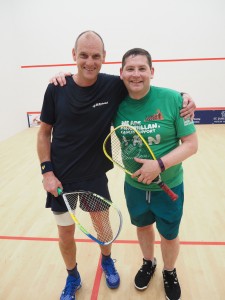 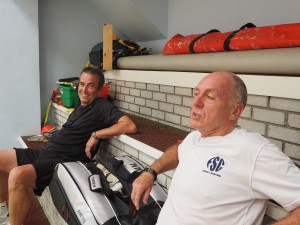 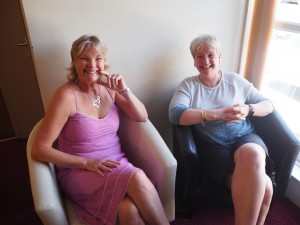 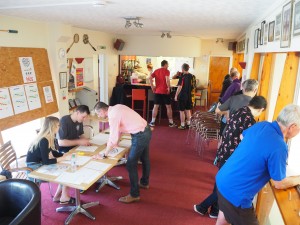 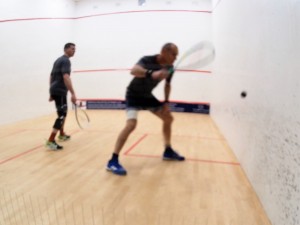 Brutal Rallies in the Over 40s 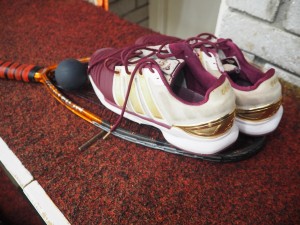 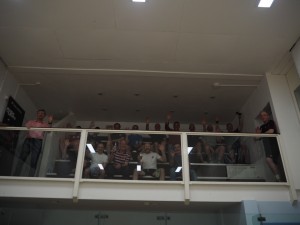