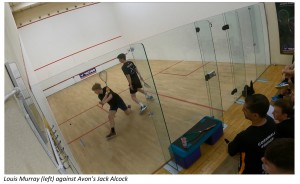 Match 2 V Middlesex     overall result 3-2 to Middlesex    Rory #4 W 3-2, ‘topsy-turvy to get to 2-2 then Rory ground out a tough 5th to clinch it.’; Jared #1 V Mick Biggs W3-2, ‘Jared sailed into a 2-0 lead but took his foot off the gas and allowed his experienced masters player (England International) to peg it back to 2-2! Then Jared took control again winning the 5th relatively comfortably.’; Louis #2 L3-1, ‘played better to take a game but a good performance for his debut weekend.’; Phil #3 L3-0, ‘a tough day for Phil coming up against some very strong opponents who controlled the T.’; Jonny #5 L3-0, ‘after his earlier 3-2 marathon Jonny’s legs went and he just couldn’t keep up the pace towards the end of each three games.’

The two day competition saw entries from all over the southern half of the country with county teams consisting of the highest caliber top five players; in some cases previous and even current PSA World Ranked players.
Sixteen counties were split into four groups of four with Cornwall battling against old rivals Somerset,  Oxfordshire and Kent with the winning team progressing into the next knock-out stage.

In the first fixture, Cornwall played long standing rivals Somerset to lose a closely contested 3-2 in matches. A stand out performance from No.1 Jared London saw him overcome Somerset’s Luke Bishop 3-2 in games after covering all four corners of the court countless times at unrelenting speeds giving London the nickname – “Road Runner” for the remainder of the weekend.

Less than an hour and a half later, Cornwall players returned to the court to take on Oxfordshire who boasted strength in depth with all strings. To Cornwall’s advantage, Oxfordshire’s top player (previous world ranked 41), Scott Handley, had suffered an injury in his earlier match meaning the starting score was one love before a ball had been hit!

In a serious of unfortunate events, Cornwall players Max Millar, Rory Brickell and Ben MacDonald all suffered three love defeats despite playing consistent squash with London once again shining through; defeating his opponent three love giving Oxfordshire a healthy dose of their own medicine! Too little too late, Cornwall narrowly missed beating Oxfordshire and lost the match 3-2 overall.

The following morning, Cornwall marched into the Bluecoat Leisure Centre arena “fresh faced” to square off against Kent in what would be the final match up of the tournament.

With the bit between their teeth, all Cornwall players were determined to “box off” their strings three love but couldn’t withstand the barrage of length and technical wizardry on show from Kent giving them the edge, once again, 3-2 in matches.

After a number of high quality wins, London suffered a plethora of “taxi’s” from previous junior u19 England No1. Ted Jeal to eventually lose 3-1. Jonathan Newton scored a great match win at 5 string, 3-1, along with Mark Howarth pulling through in a thrilling 3-2 victory. Both Rory Brickell and Ben MacDonald lost 3-0 giving Kent the upper hand.

Overall the team held their heads high upon return to the hallowed land known to many locals as “God’s County” aka Cornwall and wish the winning teams the best of luck in the next round of the National County Tournament. 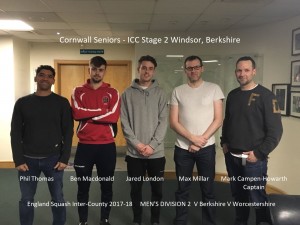 A proud occasion for Newquay’s Mark Campen-Howarth who captained the full county side in Rory’s absence – soon to become a dad! – at Windsor, Berkshire for this Div 2 Stage 2 weekend. UWE students Jared London and Ben Macdonald accompanied county stalwart Max Millar from Bristol with Mark joining Launceston’s Phil Thomas en route to converge on Royal Windsor in the knowledge that N Wales had reduced the weekend’s programme of matches leaving the Cornishmen just the two matches on the Saturday. Against the hosts, who normally play the division above, Jared lost 3-0 to the classy Paul Johnson with Cornwall strings 3, 4 and 5 – Phil, Ben and Mark respectively – all going down 3-1. Cornish pride, however, was restored with a slick 3-1 win for Max at #2. The wooden spoon encounter against Worcestershire proved a happier hunting ground for Mark’s team with 4 great wins at #2, #3, #4 & #5 against a solitary loss at #1 Jared again coming up against a nationally ranked player. A fine 17-5 win to lift heads on the long road home. To see the full results details go to: http://senioricc.leaguemaster.co.uk/

Seniors Div 2 Stage 1 at Wyvern SC in Taunton – so a tough time expected. Hampshire 2 pulled out so our gallant senior side could give it their all v Somerset and v SE Wales (usually internationals!). The eventual scoreline against both was 4-1 L with Ben Macdonald at 4 being our standout player winning 3-2 against Somerset and narrowly losing 3-1 v the Welsh. Ben is certainly improving at a good rate in the Bristol leagues (away at Uni) and looks potentially like a future county No1 if he keeps it up. Jared (also UWE – 1st yr) looked a bit rusty (that ‘fresher’ factor?) and got the run around by Luke Bishop (previously world ranked) playing at 1 for the cider boys. Captain Rory remarked that it was good to see Jared at full stretch around all 4 corners of the squash court and looking outrun for once! Rory himself lost narrowly to his Somerset oppo 3-2 and showed signs of more form following some injuries. Against SE Wales it was even tougher as their 1 and 2 were professionals!!! At 1 Welshman Elliot Morris-Devred trounced Somerset’s Luke 3-1 so no joy for Jared there! Enough said! Phil Thomas (Cornwall) did well coming back from injury to take a game off the other Welsh pro Liam Eason. Martin Thompson (Falmouth) won at 5 against SE Wales recording our only other win for the weekend. Rory went down 3-0 in the other Cornwall v Wales battle. In all Cornwall were always up against it but the Committee are delighted that were were able to fulfill the fixture with almost our strongest side bar possibly Dale unlike last year’s dismal fiasco in Stage 2. Certainly, future support for our teams will always require an effort like this so well done to the five – a ‘Famous Five’ in Stage 2 we hope!Non-playing manager Neil did well to instill some pride back into the side which after all is the cream of Cornish squash…..

Co-written by Rory & Tony B