Congratulations to Huw and The Falmouth Club for being excellent hosts. The matches and presentations were followed by a Big Bash Squash Social which included camping at the club.

Please try as hard as possible to keep the deadlines. It is the responsibility of the HOME CAPTAIN to contact the visiting team to notify dates and times of matches. The WINNING CAPTAIN will need to notify me and then arrange the next match (just follow the draw).  TEAMS OF 5 PLAYERS (must have played for the club in the league at least twice but contact me for legality decision if there is a problem). 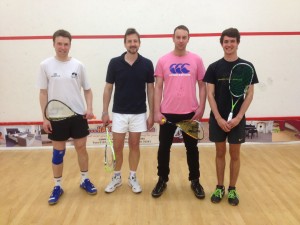 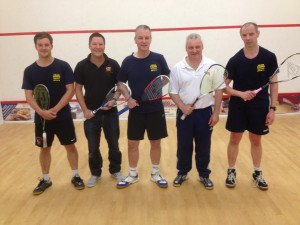 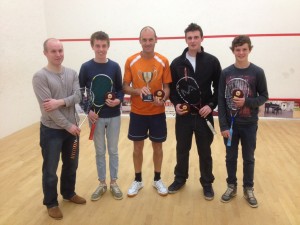 The county squash season concluded Saturday at Truro Squash & Racketball Club with the annual knock-out finals. Dubbed ‘Super Saturday’ in recent years it certainly lived up to expectations. In the Division One final, the Pawle Cup, Truro 1 took on arch-rivals Newquay 1. The encounter proved less one-sided than expected but Newquay’s hopes resting on Mark Howorth beating Chris Lawrence at 3 with Dave Priem needing to do the same against Truro’s captain Neil Counter at 2nd string. Unfortunately the seasiders both went down 3-0 and 3-1 respectively but both matches thrilled the crowd with top-class rallies. Young Jamie Johnson restored some hope for Newquay by beating young rising star Zephron Counter 3-1. Truro’s other young starlet, Jarod London, then took on veteran Martin Bonell (RAF & Newquay) in what was probably the afternoon’s closest and most entertaining match. At 2-2 it looked like Newquay could square the overall match score with Bonell in superb form, but speed and pace proved decisive in the fifth as impressive London earnt and deserved a 3-2 victory. The final rubber, Newquay’s captain and Number 1 Matt Waterton versus county number 1 Jamie Moxom, saw some brilliant exchanges early on. However, and as predicted, Moxom’s superiority and fitness showed in the end with an emphatic 3-0 win though Waterton certainly had his moments of brilliance too.  Truro 1 won 4 matches to 1. This year’s Pawle Cup victory for Truro 1 turned around an otherwise disappointing season for the strongest side in the county on paper at least. Unable to keep his  full squad together for all the league matches in Division 1, Counter was forced to play some reserves for most of the second half of the season. This reshuffled the pack leaving Newquay 1, Truro 2 and 3 next strongest in the title chase. Both Newquay and Mark Bracey’s Truro 2 (injuries) faded in the final quarter to open the door for the Division’s most consistent side Truro 3 to claim the title by a 30 point margin. Tim May’s team certainly deserved the county’s top honour with Truro 2 coming runners up. Truro 3: Tim May, Elliott Moore, Dale Diment, & Pete Walker. As last year’s Division 2 winners but with reinforcements to the squad they have certainly earnt a lot of respect in county circles. Falmouth 1, with their problems on and off court, came bottom of Division 1 in relegation position. What a far cry this is from the days when they have dominated county squash. Division 2 became a three horse race with much fancied Bude beating Truro 4 and Penzance 2 into 2nd and 3rd places respectively. Bude then went on to claim both honours for Division 2 sides by winning the Hine Plate at Truro on Super Saturday. Matt Yeo’s men won 3-2 against Truro 4 with the top three players proving too strong for their opponents. Bude now have the summer to recruit new players if they are to accept promotion to the top flight of county squash. Falmouth 3 and 2 occupied the bottom two places in the division but with many youngsters in their teams there is some hope for a brighter future and a restoration of pride.

One Response to Events