Good Cornish Showing in the South of England Masters 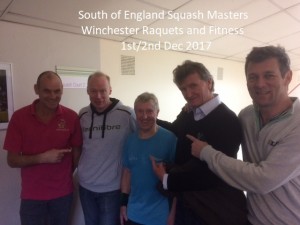 Six players from Cornwall entered the S of England Squash Masters at Winchester over the weekend recording a combined three wins with standout performer Jack Halford (China Fleet) reaching the QF only to go out narrowly 3-2 to the eventual winner in the tightest of matches. Surely Jack will get an England cap soon. Unfortunately, Tony and Jon pulled out due to injury from last weekend’s Cornwall Masters but Tim and Neil did us proud with two very impressive first round victories. Also flying the gold and black was Roger who also plays at Kennilworth S&RC. The Cornish certainly made their presence felt and are now well known on the circuit. Exeter is the venue for the W of England Masters on 5th and 6th January – you can enter  via the http://www.englandsquashmasters.co.uk/ website.