Racketball is the UK’s fastest growing sport! It is played on any regular squash court and is similar to squash. In racketball a larger ball, which does not need warming up like in squash, and a shorter racket are used, as shown below. 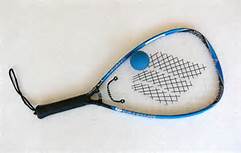 The fact that the ball is bigger, more bouncy and does not need warming up means that the rallies last longer, as the ball moves slower giving the opponent more time to react and get to the ball. The shorter racket also helps with hand eye coordination making the ball easier to strike. Overall this makes the game much easier to pick up than many other sports like squash or tennis. Racketball is said to be, “Easy to learn yet difficult to master” which is one of the key factors in the sports recent growth.

1. Racketball equipment
Racketball is played between two players on a squash court using a standard racket each, and a ball approved by England Squash & Racketball.

3. How to win points
Points can be scored byeither player. When a player fails to serve or to make a good return, in accordance with the rules, the opponent wins the point. When the Receiver wins a point, they become the Server and add one to their score.

4. Service
a. The right to serve is decided by the spin of a racket or coin. Thereafter the Server continues to serve until they lose the point; the opponent then becomes the Server.
At the beginning of each game and each hand, the Server has the choice of serving from either service box and shall thereafter alternate for as long as they score points and remains the Server.
c. The ball, before being struck, shall be dropped or thrown on to the floor, without touching the wall; it must be served direct on to the front wall (1) between the tin (7) and the out of court line (3), so that on its return, unless volleyed, it falls to the floor within the back quarter of the court opposite to the Server’s box (coloured in yellow).
d. A service is a fault:
(i) If at the time of striking the ball the Server fails to have at least one foot in contact with the floor within the service box (coloured in purple), and no part of that foot touching the line surrounding the service box (called a foot-fault ).
(ii) If the ball touches the back wall before touching the floor. It may touch the side wall (2) before touching the floor. A ball which strikes the back wall and floor simultaneously is a good service.
(iii) If the ball first touches the floor on or outside the short or half court lines (8) delimiting the back quarter of the court required in Rule 4©.
(iv) If it is not bounced on the floor before serving

5. Play
After a good service has been delivered, the players return the ball alternately until one or other fails to make a good return, or the ball otherwise ceases to be in play, in accordance with the rules.
NB: If any part of the ball touches the out of court lines (3) or the tin (7), the ball is deemed out. Similarly, if the ball bounces on the short line (8) from a service, the serve is deemed a fault.

6. A Good Return
A return is good if the ball, before it has bounced twice upon the floor, is returned by the striker on to the front wall above the tin (7), without touching the floor or any part of the striker’s body or clothing, provided the ball is not hit twice or out.

7. Lets
A Let is an undecided stroke, and the service or rally in respect of which a Let is allowed, shall not count and the Server shall serve again from the same box. A Let shall not cancel a previous first fault which was not taken by the Receiver.
(a) A let may be allowed:
(i) If, owing to the position of the striker, the opponent is unable to avoid being touched by the ball before the return is made.
(ii) If the ball in play touches any article lying in the court.
(iii) If the striker refrains from hitting the ball owing to a reasonable fear of injuring opponent.
(iv) If the striker, in the act of playing the ball, touches opponent.
(v) If the Referee is asked to decide an appeal and is unable to do so.
(vi) If a player drops the racket, calls out or in any other way distracts the opponent, and the Referee considers that such occurrence has caused the opponent to lose the stroke.
(b) A Let shall be allowed:
(i) If the Receiver is not ready, and does not attempt to take the service.
(ii) If the ball breaks during play.
(iii) If an otherwise good return has been made, but the ball goes out of court on its first bounce.

10. Warm-Up
Immediately preceding the start of play, a period not exceeding five minutes shall be allowed on court for the purpose of warming-up.

The History of Racketball
…..UK-Racketball interview John Robertson, “Robbo”, one of the founders of Racketball
Racketball was introduced to the UK in the early 80’s by Tony Gathercole who at the time was one of Slazenger’s top reps, a good tennis and squash player and worked for EMI who owned around 25 squash clubs in the UK.

Tony Gathercole saw racketball as a way of boosting court usage during the day. Along with 8 other EMI coaches (including John Robertson his son in law) they decided to make a concerted effort to bring this new game “Racketball” to the UK. The enterprise was sponsored by Slazanger who developed the “green” ball and who initially provided the rackets for the EMI clubs. The rackets were slightly smaller than the ones being used in the US at the time; the ball was nowhere near as fast and probably bounced a similar amount to the blue balls of today. The rules for the US game were also adapted to incorporate the lines on a squash court of which there were an abundance in England.

The reason for racketball’s popularity and the benefits that the introduction of the sport had for squash clubs was the same back in the 80’s as it is today. With the bouncy “green” ball the game was perfect for anyone looking for a medium intensity sociable workout away from the boredom of the gym and was quickly taken up. The game has now spread out from the original 8 clubs to what we have today a sport played all over the country and still spreading.

At its peak John Roberson (Robbo) believed that “The Manor” in Ilkeston (host venue in the 2011 UK-RB Series) and “Brampton Manor” in Chesterfield had around 250 and 500 racketball players respectively. At the start he claimed there was a similar feeling by traditional squash players as there is today, that racketball should not be taking up time on squash courts and with a negative feeling towards many of the players (especially women) that these were squash not racketball clubs. Looking back, “Robbo” said it always made him laugh because the so called big squash fans who would get on his back and grumble about the racketball being played are now the sport’s biggest takers. “Once they got dodgy knees, backs or hips they had to sack in the squash but they were massive lovers of the clubs and once they started playing racketball they got hooked just the same as they had with squash all those years ago. The game that they had despised breathed new life into them, they’re back having competitive matches, big rallies and loving racketball.”

I quizzed “Robbo” on where he thought the game had gone wrong, why so many clubs were closing and what he thought we could do to change things and get membership numbers back on track.

“We did massive leaflet drops” was the first thing he said, “We targeted people for during the day sessions to get them on the courts and ran introductory courses to get them going. It was amazing to see a new sport spring up so quickly, to get 500 people playing at Brampton Manor was fantastic.”

When asked why he thought clubs were struggling today he was just as quick to voice his opinions.  “One of the big problems with clubs back in the 80s was that managers tried to make too much money without putting enough back. When a profit was made it was taken out rather than put to use maintaining the club. This resulted in lots of clubs becoming run down and as the facilities deteriorate the membership numbers fall. This is why the top clubs today are the members clubs, the ones that invest back in all the money they make. Edgbaston, Nottingham, Hallamshire all have top facilities and are completely owned by the members.”

“Never underestimate the impact that social events have on a club, the big advantage that squash and racketball have over gyms is how social they are, you don’t just go to a box (in most cases a very nice box with Jacuzzis and a swimming pool), exercise and then go home, you make good friends and the clubs end up having a big impact on your life. At some gyms people will have been going 3 years and still not know anything about the other people in the changing rooms, this doesn’t happen with squash, by the nature of the game you have to interact with the people around you. If clubs can tap into this and build a social scene around the members this can have a massive impact on their future.”

Robbo said he thought Pete Goodings at the Manor is on the right lines. “It doesn’t matter who you are if you want a game Pete will pick up his racket and go on court. A top club pro should breath, eat and sleep the game, virtually live at the club (literally in the case of Pete Goodings) and at every opportunity promote the club and the game. As well as having the right (dedicated) club pro the clubs also need to market themselves in the right way to attract new people to the club, it then becomes the club pros job to keep them interested.”

From my own observations the problem that many clubs find is that when money becomes tight the first thing to go is the subsidises for social events, money to attract a good club pro (and keep him motivated) and the marketing budget. This means that if clubs aren’t careful they end up being sucked into a negative spiral which is probably an all too familiar story for the sport today. Less income results in less money available for maintenance and marketing which again results in less income and so forth. How to get out of the hard times is the real test but putting as much profit back in is what John Robertson claims is the best way to try and weather the storm.

Robbo still coaches at Brampton Manor now running racketball and junior sessions, but does it for all for fun, he says to watch out for his next crop of junior’s to rival his old stars (Mark Chaloner, Jason Nicol and Fiona Geeves, to name only a few). Like a true squash addict he just can’t leave the game alone.