Jeremy Gimson was a Truro SC player who joined the club in its formation years in the 1970s. He was ever present in the teams and played at county level as well. After his competitive playing days were over Jeremy devoted his life to the running of the sport in the county and became Life Long President until his passing in 2014. He also served as manager of the county seniors dealing with selection and often accompanied the team on county weekends. His influence on our sport has been considerable and he is fondly remembered by many of the older generation of players. His granddaughter Clare Spouse became CCSRA Girls’ Champion in recent years. 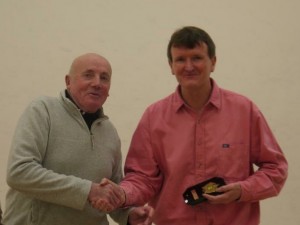 A previous Gimson Trophy for the Most Deserving Player was presented to Cornwall Squash in the mid-90s. This trophy was awarded during the nineties and early early years of the new century. This trophy had been overlooked for a number of years until reinstated in 2016. It was presented at the season’s climax known as SUPER SATURDAY which was (and still is) FINALS DAY for our two knock-out trophies, The Pawle Cup and Hine Plate.

The trophy needs updating and (to be honest) has been overlooked in recent years.

Most Deserving Players, the Archive……..