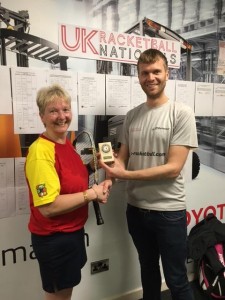 “I played 3 matches on the Saturday, 2 in the O45s which I won 3-1 and 3-2, but lost my first match in the O’50’s (to the eventual winner).  I had to play my final match of the O45s at 9.00 a.m on Sunday morning, knowing that if I managed to win I could bring the title home.  I was so nervous I couldn’t eat anything as I knew my opponent has been regularly selected to play squash for England Ladies O45s in the Masters’ Home International Championships, as had the winner of the match I lost in the O50s! They both had their England kit on!   I kept my nerves under control on court, kept hitting good length and width, kept the pressure on and managed a 3-0 victory!”

“Next up was another O50s match, with scores tied at 2-2,  the fifth game was nail-biting, and I managed a win!   Two hours later I was on court again playing in what was to be the runner up match for the O50’s, I went 2-0 down, fought hard for the 3rd game, saved a few match balls, and took that game 14-12, but I then ran out of steam and lost in the 4th game, IF I had won that match I would have also been runner-up in the O50s!”

For more on RB @ Falmouth, our leading club in Cornwall in this exciting offshoot of squash, and how to get involved click on: Falmouth Racketball